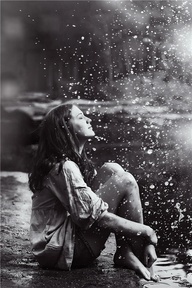 I found myself travelling back some nine years in time, all from one line in the Gospel reading at Mass yesterday.

That line is from John 14:27: “Peace I give you, My peace I give you, a peace which the world cannot give, this is My gift to you. Do not let your hearts be troubled or afraid.”

Right there and then, the scene of Mass melted away, and was replaced by one from memory.

It was one of the first few RCIA (Rite of Christian Initiation of Adults) sessions.

I had gone there as an Inquirer (much as the name suggests, I was merely inquiring, looking to have some questions answered, and with no thought of commitment to getting baptised at all). I was 24. Young, idealistic, a dreamer, and in love (in all the wrong sense!). I was a young copywriter, I had many friends, partied hard, drank almost daily, smoked wildly, and was by and large, happy and thrilled to be able to do all these things.

Someone (must have been Tony the RCIA coordinator, or our late Spiritual Director Father David Thexeira) talked about this peace that Jesus came to give, “a peace that the world cannot give”.

From everything that was said, I heard that one line loud and clear. Nobody was yelling. It wasn’t proclaimed in a thunderous voice, like God was speaking from on high. It was simply… spoken, and it resounded in my heart. In that place deep within, something clicked and I recognised the truth of what was spoken.

Peace was not something I had ever chased after. Not because I didn’t believe in it, but simply because I overlooked it. I didn’t need peace at 24. I needed joy! And passion! Which I thought I had.

But that Thursday night in Room #03-02, it dawned on me that I had been chasing after everything that the world offered, and yes, I was satisfied on most parts, but there was no rest in my soul. No calm in my heart. No peace in my whole being. Which was why I just kept going and going, chasing and seeking, looking around the next corner hoping to find that one piece of the puzzle that would finally complete me (and I hadn’t even known that anything was missing!)

A peace that the world cannot give, sounded so immensely curious and… attractive.

In a very strange way, Peace suddenly appealed to me like it never had before. And it wasn’t a truce. It wasn’t a peace that meant I had to give up anything. Nor did it mean I had to settle. I could continue pursuing whatever is wonderful enough for me to work at.

But it did mean that there is a better way to chase the dreams I choose to chase. When Truth is spoken, it resides in the heart. At least for me. Again, I was 24, but I heard that Truth with clarity and conviction.

Jesus had appealed to me in a way I would not have thought was attractive in any way, but He made it work – for me – in a special, unique way that would only speak to me.

Yesterday on 5 May 2013, I remembered one of the first few encounters that had kept me on the RCIA path… and then to continue my ongoing journey of faith. There would be many more along the year (and years to come!), but this was one of the first, when I was sold on the idea of such a simple philosophy of Peace. The peace that our faith offered. A peace that the world absolutely cannot give.