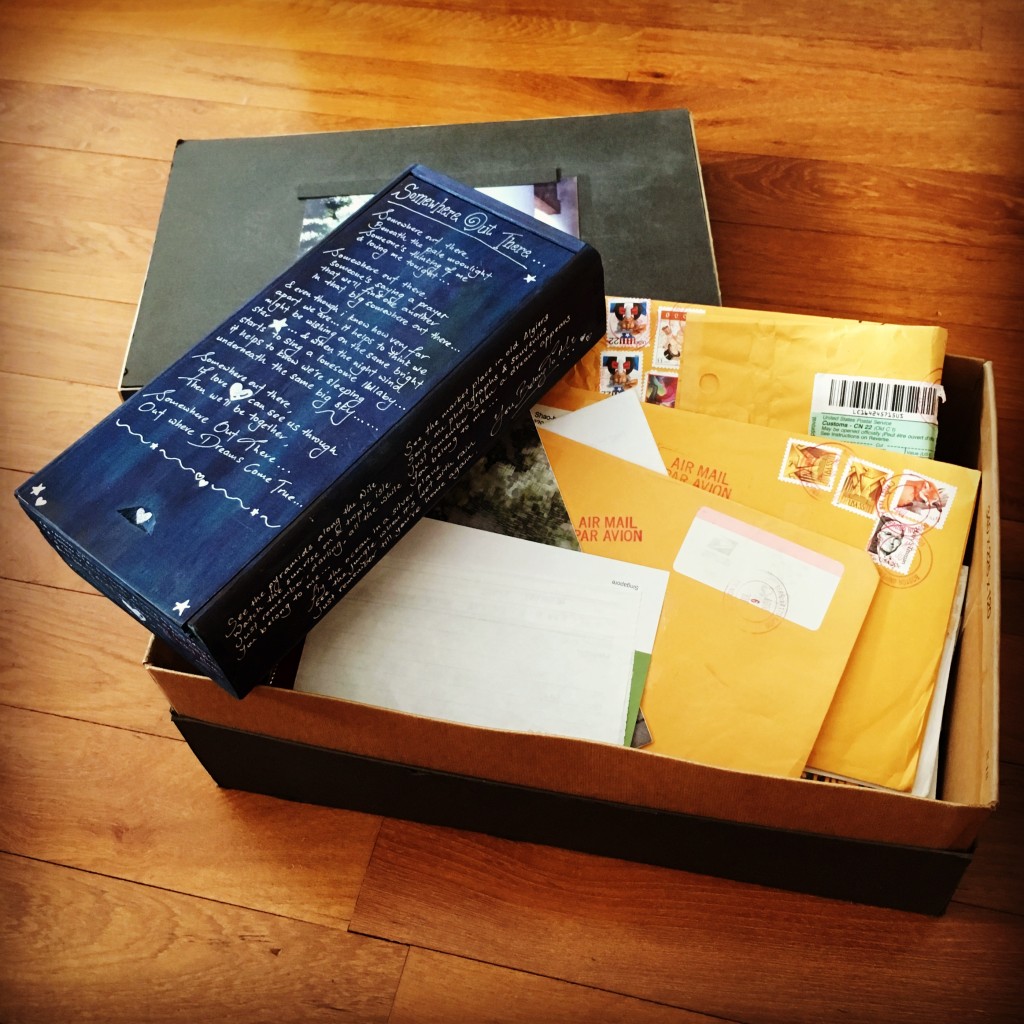 That afternoon, we checked into Siloso Beach Hotel on the southern island of Sentosa in Singapore, for no other reason than that it was closest to the beach where we had built many memories twenty years ago.

I had not requested for him to bring anything; myself, I arrived armed with a Project Shop Blood Brothers canvas bag that smelt just that rightfully musty — it had been a gift from him, now almost two decades as old as “we” had been.

Let’s just call him AL — two letters of the alphabet that when placed side by side, still makes me catch my breath and wounds me as I miss him after all these years.

For sentimental reasons alone, I had brought along all the letters I had ever received from him, snugly and safely kept in their place in a forgotten old shoebox that never sees the light of day, where they stayed protected and sheltered from the harsh realities of the day, and where they never had to realise they were outcasts, rejected and discarded remains of what once was.

Long before we had apps that helped us track task lists and to be accountable to the goals we want to achieve, I had my own method — with the help of one slender, dark empty bottle — to number the dreams worthy of my heartbreak as well as to count the days I survived the nights when those dreams invaded my being. The goal was simple: I would place a paper star in the bottle each time my heart came undone by accident when AL visits me in a dream I didn’t wish for but which I welcome.

Finally, there was this wooden box I had cherished as a child, having kept it in my possession for that “something special” that would come along. That “something special” eventually came along when AL stepped into my life and that was when I painted our love a midnight blue for the darkness that always hovered near our love light, sprinkled stars that I had hoped would yield promise enough to steer the blues away and inscribed lyrics to work like protective spells for us.

“Why do you do this?” he had asked with the annoyance he couldn’t mask. I was always the sentimental one; he, the ever-practical man since he was an eighteen-year-old boy who could never embrace this side of me.

“I just,” I breathed. “I guess I just wanted to remember a few things. How often do we meet anymore, anyway?”

He sat down next to me, in the small, cramped space at Siloso Beach Hotel.

Just the way I remembered him.

“We are happier this way, now,” he had said gently. “Right?”

I read his letters, some parts to him; mostly to myself. I laughed at how mushy he had been; he looked impassively at me then. I continued to read even as he started to pick up pieces of the old mail between us.

Some words brought to mind with razor-sharp clarity just how much unbridled love we had offered each other. Other memories twisted me up inside-out and bent me over backwards with the pain I could still feel in my gut. He placed a hand on mine.

Finally, in between choking on laughs and stifling deep breaths to ease the torment within, I gave in and let the pain out.

AL pulled me close in the same way he used to engulf me with his whole being. He was always so strong and so fearsome, the very reason why I come completely undone when he remains vulnerable with me despite all that strength.

“You scare me because with you, I always feel more vulnerable.”

That day was not a day of merely 24 hours. It broke all the rules of space-time physics and spanned two whole decades.

We travelled to and fro in time, going back to that first time we met, and the last time we kissed.

We romped in reservoirs by night and shared life stories that had not included each other up till then. We crossed time zones on the telephone, you know, those things with a cord attached to the wall, and spoke in hush tones about our life with 15,118 kilometres between us and what we did in our days that did not include each other.

We fought again and again. He said all over to me again, “You’ve always just thought about yourself. You’re such a bitch!” and once more, also, “You’ve changed. You don’t just bite now. You bite hard.”

All over again, I was thrilled twice a year with the non-surprising arrival of a bouquet of roses at my home. He was that predictable. The seven years apart that drove our relationship apart and saw us fighting and reconciling seven-times-seventy-times didn’t put a dent in his dedication to get that bouquet to my house. On time. In the mornings of Valentine’s Day (which we always scoffed at) and on my birthdays.

Right there and then in that room, AL proposed to me again. Twice. The last time, he said, “When you’re finished with your seventh boyfriend and I’m ready to grow up, let’s get married.” That was when he had finally returned from his studies overseas and we had both at last, been single again at the same time.

No rings, no fancy proposals or pretty words beautifully stringed together with hard work and heartfelt intent. Just honest admissions and recognition of how we ought to be together, stated simply and sincerely. It was enough. He had always been enough.

“If we ever have a child together, I think I’ll have to worry about you and take care of you on top of the kid,” he had muttered in frustration all those years ago. Of course, the man hated that I acted like a child, ran around delighting in simple things and marvelling at creation. Of course, this was a time before I was stripped of delight and robbed of joy.

I laughed in his face. (Of course, this was before I grew up and decided just how chauvinistic that statement really was.)

And now we have three children — a boy and two girls — between us.

Between my husband and I, and AL and his wife, there are three little people surrounded with so much love and spoilt with so much affection that we heap on them, who may never grow up knowing their parents’ histories and that we too, had once been young and loved like fools, driven by madness, hormones, chemicals and that thing we call ‘love’. Will our three young souls ever know that inside our old souls, we had once been capable of abandoning ourselves to hope and we had unchecked faith in love? That we had once stared at the pain to come and dared it to take us whenever it wants but for today, we love with every heartbeat all the while knowing one more heartbeat surrendered means one more heartbreak to endure?

Will we ever teach them to keep their sights on promise and possibility and that when those vanish and we are destroyed, that someday, like the phoenix, we would be reborn, maybe a little more contrite and fragile but just as brave, to take flight towards the future? And that in that glittering future that we spy, there could just lie another rewarding happiness? Never as dazzling, giddying and spellbinding but with its full cup of life-giving love should we choose to drink from it?

“You wrote about me,” he had accused me angrily even though his arms were still around me. “You know I hate that.”

The final time we had broken up had been in part because I had included an episode of our time together in my blog. He had exploded and I had not understood why.

Love letters have been written everyday since Adam could carve a symbol on the tree that God must have permitted him to deface. Expressions are needed when the heart can take no more. When there is too much love and anger, bitterness and hope, light and fear, we need to let some of that pressure out — by acting out and smashing things, or creatively in words, through art, photographs and adult colouring books, conversations over wine or just adding vials of tears to the personal collection. Or shooting it off into digital deep space on a blog that nobody even knew about.

We’ve done it all — the tangled mess, the unyielding and uncompromising stances. We’ve escaped futile fights that would go on forever and tasted victories that come after.

This, this will make sure that doesn’t happen again.