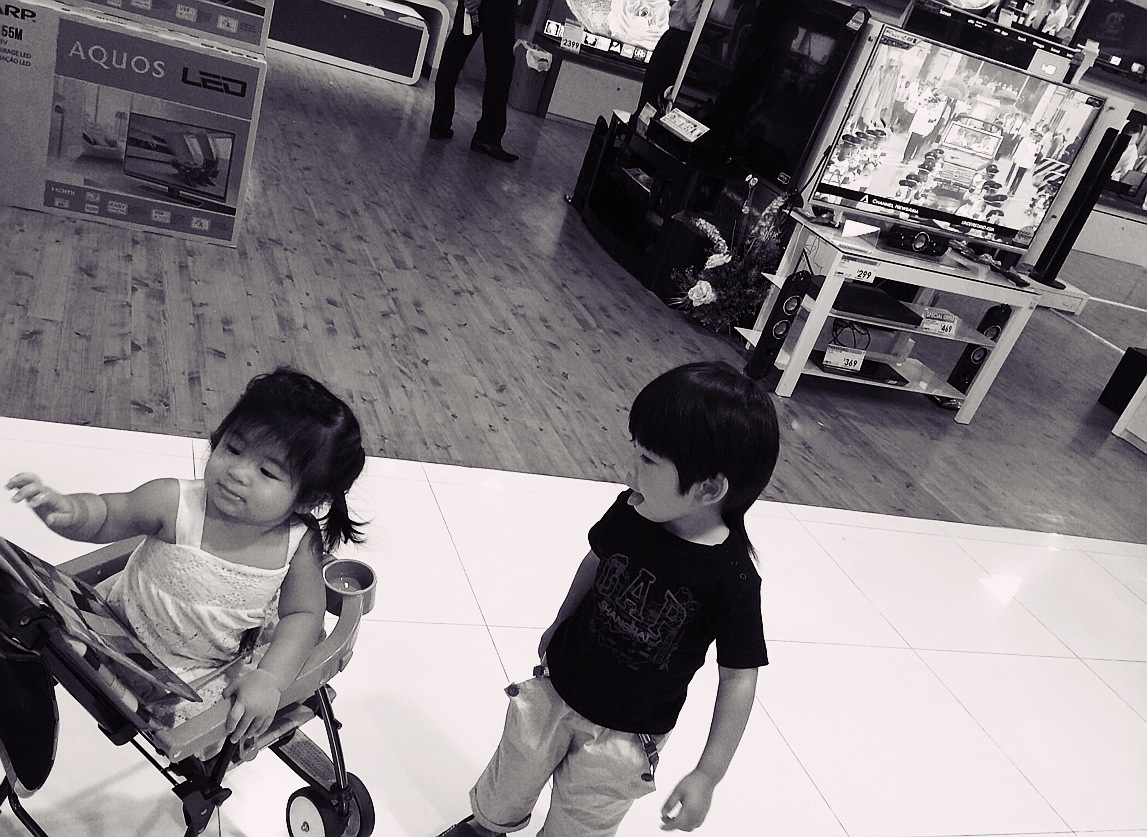 My dear Matthew and Emma,

The first time you, Matt, ever wore black was on Sunday 30 March, as we join our fellow Singaporeans in bidding our final farewell to Mr Lee Kuan Yew. Emma, you didn’t, because that just happens to be a colour you don’t have in your wardrobe.

This picture here was taken while we were at Gain City to pick up a lightbulb after Mass. Matthew, you are almost three-and-a-half and Emma, one-and-a-half. You were both obviously in your own world, even though you tried to keep still as you noticed the small crowd gathered around this particular television set.

I said to your father, “It would’ve been nice if all their TV sets were tuned in to the State funeral.”

It might have been a respectful gesture… and then again, maybe just a sentimental one.

I’m not sure because I’m still reeling from the emotions of last week when our country’s founding father, Mr Lee Kuan Yew, passed away.

You won’t know him, even as I hope that you, Matt, would remember some of these days.

But let me tell you that he was a giant in almost all aspects of my life as I was growing up. For sure, he held a place in all our psyches. People respected him, loved him, feared him, hated him – and all of them with enough good reason.

Your mummy here, started my young life looking up to him and almost loving him. Well, it’s because I love my country and Lee Kuan Yew is (was?) synonymous to Singapore.

Some of what I cherished fondly in my memories include:

Being able to sing national songs in different languages, including Tamil! All of us, Chinese, Malays, Indians, Eurasians, could carry those songs well, and that’s because we were forced to learn them in school. It is still a joy to share this accomplishment with my peers.

We grew up with a Courtesy Lion (and a Sharity Elephant), and we learnt our manners from them. We learnt not to litter and not to spit in public. We learnt to give up our seats on the buses, and then trains, to the elderly and the pregnant women especially. We learnt them because there were designated seats where you could still sit in but stand a higher chance of being shamed if you were caught in it when there was someone else who needed it more. Of course, not everybody followed those guidelines but we didn’t need STOMP to shame us then either.

We understood that at certain times of the year, there would be a stronger scent of incense paper and joss sticks being burnt, and at other times of the year we would see our Malay neighbours all dressed up with clothes made from the same fabric. From young, we learnt about Thaipusam and how brave and devoted those Hindu men must be to be able to carry through with their kavadi dance offerings. We cooked pots of curry when we liked and we didn’t pee in public after a while.

Your grandfather whom you never met – my dad – bought season tickets for our family and we got to watch our Singapore LIONS play their way through the Malaysia Cup every year, at the National Stadium you never got to see. It was awesome. At the height of those games, 55,000-60,000 fans would gather at the stadium to support our team, and we would all be dressed in LIONS garb (sponsored by TIGER, our first locally brewed beer). The mood at every game was sheer electrifying madness and our people, insanely passionate. The Kallang Roar was our signature show of solidarity at these games. It is not uncommon at those matches to hear bookies and gamblers who had placed their money on the Malaysian team, to root for the LIONS. That was the spirit we had – even if we knew we were on the losing side, we still supported our own.

The events and sentiments of last week filled me with nostalgia for some of these memories. And I remember a time when I felt so patriotic towards this country, believing everything that Lee Kuan Yew shared with us of his vision. I believed our role was to build a democratic society, based on justice and equality regardless of race, language or religion.

Growing up didn’t change my love for Singapore. Do you know that this mother of yours includes in her prayers: “Thank you, God, for letting me be born in Singapore.”? I know life could be a lot worse elsewhere, in poverty, hardship, war even. I have always been grateful for this country I love.

The events of last week reminded me – and many Singaporeans – of all that Lee Kuan Yew had devoted to Singapore. I believe we all have our views of what he did right and where he went wrong, but the one thing that our countrymen share perhaps, is that his single-minded purpose was to build this country.

A page in our history has just been turned. And I find myself wondering about the Singapore you two will grow up in. If you will enjoy the safety and security that I did, and if you will have to vie for your place in our country amidst those who do not wish to share our identity. I wonder if you will feel like this is home when surrounded by those who do not want to make it so. I wonder about whether you will make good friends and neighbours, and feel your heart beat in your chest when National Day comes by. Will you know this is your country? Does the pledge still mean anything now if the values stated in it crumble line by line?

For better or for worse, Lee Kuan Yew kept us intact, even if it was just by his sheer presence and willpower. The legacy he left behind are the people who had felt some kind of heartbreak when he departed, those who may or may not fully agree with him but who genuinely do love Singapore and want to make it better.

He had built a party to seek the best interests for Singapore, not a party that sought its own interests. To me, watching re-runs of his speeches convinced me that he was a person who did what he felt needed to be done, for the greater good, even if those actions were wrong. But he didn’t pursue his own interests. It seemed like his party and his work were all means to build this country, not to serve itself and not an end in itself.

I’m not sure if that still applies today. I know I’m disillusioned because I don’t think so.

But for your sakes, I will be happy to be wrong. I’m guessing we will know soon enough but let’s wait and see.