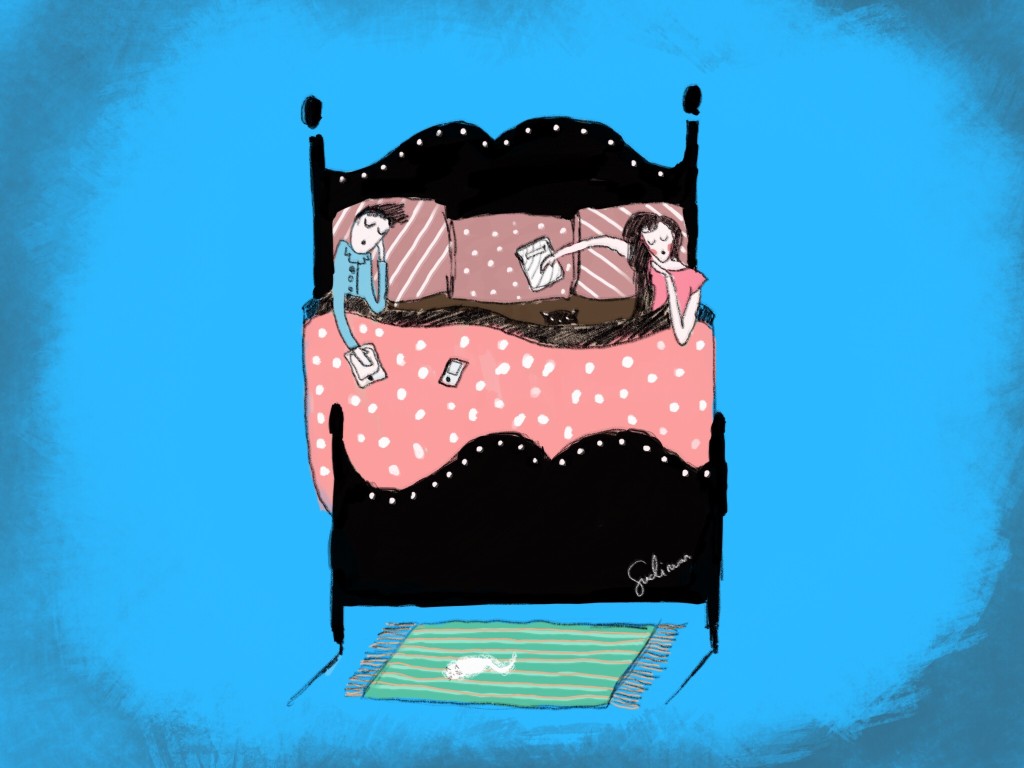 Sometimes it may be as it’s said: Just let sleeping dogs lie. Illustrated by Wan.

One of my favourite scenes from the Sex and the City Movie is the one where Carrie and Mr Big were lying in bed; Carrie reading that non-existent book of “Love Letters from Great Men”. It moved me the same way the “It’s Time” scene in Eat Pray Love does – the one where Liz and Felipe were each engrossed in their book before Felipe announced it’s time for bed (among other activities behind closed doors).

After six years of marriage, my husband and I have our own bedtime rituals as most couples do – and it’s a pretty eclectic mix of many things that are probably quite far less romantic:

Most days, we are armed with our mobile phones in hand – playing games, catching up on social feeds or reading news (with live news streaming in from all over the world, is it any wonder many of our nights have also been spent discussing the notion of “free speech” and just about the last three terrorist attacks?). Some nights he is furiously replying emails while I catch up on my reading.

There are many nights where we put on a movie or binge-watch a TV series we both enjoy, before dashing off to read spoilers or delve more deeply into what the episodes are really about. We share our discoveries and discuss plotlines. Sometimes we watch TED talks together and then the things we discuss are on a whole new level altogether.

(Oh yes, there are many nights we go to bed with the ills and promises of whole worlds between us.)

I’m pretty sure we can be doing a dozen things better for a healthier couple sleep routine: like, not triggering thoughts for discussions before we sleep. Or we could be spending time cuddling and snuggling before we turn in for the night. Maybe we shouldn’t be engaging our brains in game strategy just before sleep and definitely we should be powering down those digital devices to get those melatonin levels up so we could possibly sleep like our babies next door.

We’ve made countless efforts to switch our lifestyle around according to the many expert advice out there to do the active pursuits from dinner time to bedtime and then spend our last waking minutes just … I don’t know, staring into each other’s eyes and boring ourselves to sleep, maybe?

But you know what? A part of me suspects that if we were to do that, there will arise another expert of some field to tell us that’s not right either.

Besides, this is where and when my husband really finds his space to unwind from the day and ease the tensions of hard-fought battles away. Perhaps he’s reducing his wars at work to what he can eliminate via his mobile phone. Or maybe he just prefers to end the day with endorphins as he chuckles away at cold jokes (his favourite) and SGAG humour (they’re really pretty awesome if you haven’t been introduced).

The truth is that, sometimes, it’s infinitely more difficult to carve out a personal couple space when we’re trying to fit ourselves into the many prescribed boxes. And because so much unsolicited advice is being shoved into our faces everyday, every box we leave unchecked does play a part on our psyche – to disarm us and make us feel like maybe if we did more of a certain thing, we would have fewer challenges in our married life. (And have I mentioned the feeling of helplessness and failure that we feel from time to time when we read that the strongest marriage or most successful couples do X, Y, Z… and we don’t?)

For now, I take consolation with the fact that we do get some things right.

Like getting into bed at the same time and still fighting for the covers together, showing my husband the day’s videos of our children that he especially delights in. And that’s the way it is even when we’re engaged with our digital devices. Not silently, each in our own world, but always peppered with eagerness to share our discoveries with the other.

So maybe I’m never going to end my nights as romantically as Carrie and Mr Big, with me spewing love letter-poetry to my husband who would love me more because I’m all the more delicate and charming for it.

What I have in exchange for all that is the two of us chuckling away at random cat videos and lame jokes, or discussing deep into the nights our thoughts about how we’ll like our world to evolve, the ideals we each have, and how our children are “just such sweetie pies” (as only the two parents whom they belong to can repeat as much as we like to each other without putting off the other), before we complete our final routine for the night, which is to kiss each other with a “Goodnight babe, I love you.”

And most times, I really do think I’m perfectly fine with the way we end our nights. Well, maybe with more mindful boundaries set in place to replace digital time with time for more precious interactions.

Or to be more fully aware of the reality: that we may each have our own spaces to retreat to, but that at the end of the night, there is very little of those things to come between us.