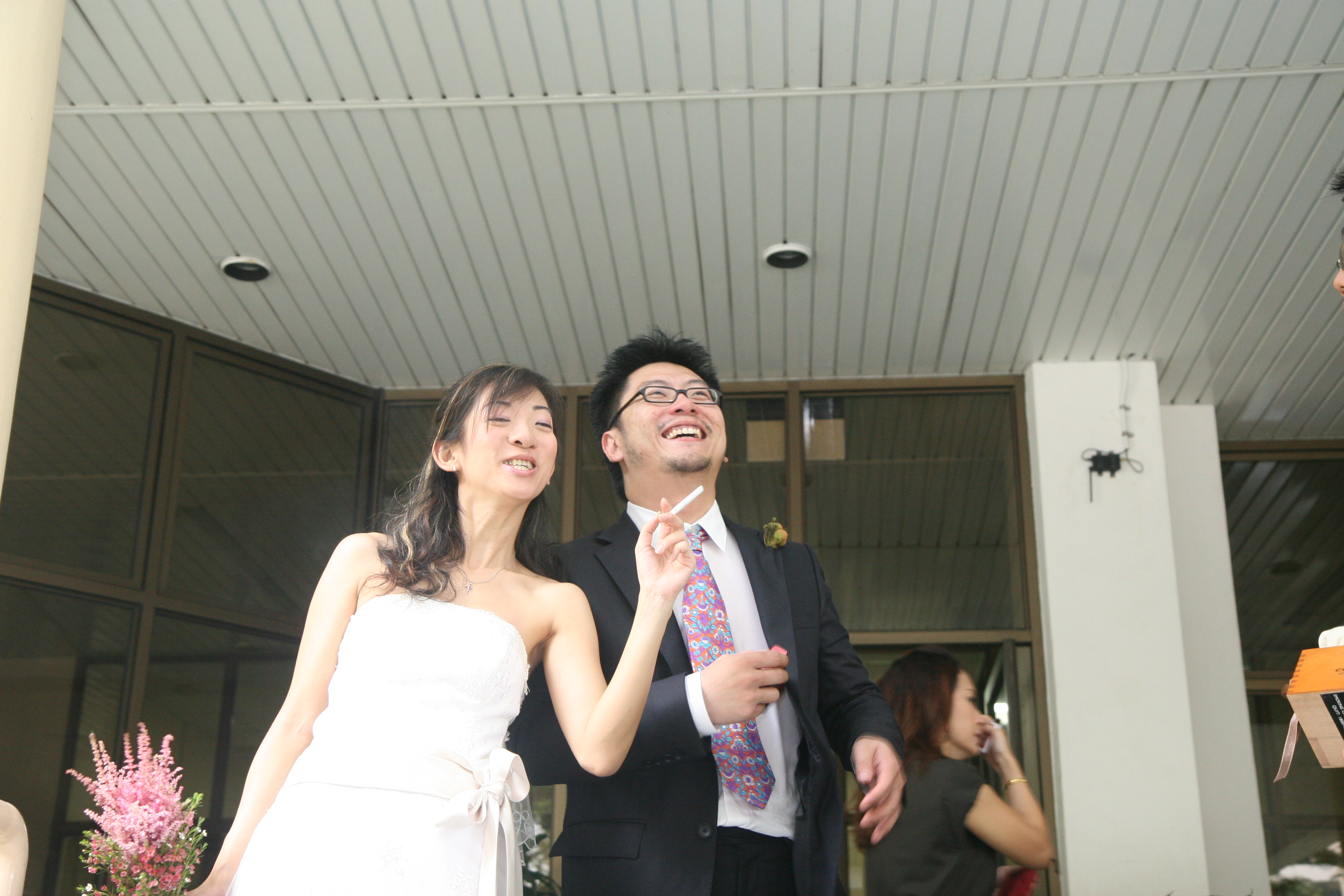 One of my favourite memories – how we had a quick smoke before heading to church, much to photographer’s disapproval.

I thought about all the could-have-beens yesterday while out on errands. And that’s why I love driving – it gives me plenty of time to think and daydream, even. But yes, specifically, I thought about my ex-boyfriends.

I could have been a real taitai if I had married one of them. He had a filthy rich family. Like, filthy rich. He was my first real love, and the one who totally broke my heart. He was the reason I sat at Novena Church at 11pm one night, accompanied by one good friend, and a letter he had sent me from overseas where he was studying. I wasn’t Catholic then, but somehow, I found solace there that night. Six years after he left for studies (in between, I get letters and mail, flowers every year for my birthday…), he returned and we got back together. But the one real factor that proved we were never meant to be was already in place – I had become Catholic. And he’s a Protestant. It wasn’t irreconciliable to me, but it was to him.

The second one broke my heart over three years of our on-and-off relationship. He’s Catholic, and I will always think of him as the angel God sent to bring me to the Catholic Church. I had attended Mass for almost two years with him before the calling to join the RCIA came when I was so greatly tempted to cheat my way to receive communion one day. It was always his elder brother who sought to guide me in the faith though.

God had brought him into my life just as I was seeking a religion after recovering from that first breakup. Once I was baptised, I found strength to eventually end the relationship once and for all. God saw fit that my angel did his work, and released both of us. (I didn’t see these patterns until I had to write my faith story one day for Landings.)

You know I’m not the sort who falls in love easily, but once I decide to, I do fall hard, with everything I have. And I did love the both of them. To this day, I remember them fondly and there is definitely a part within me that will always be held by each of them.

Somehow, I thought of them yesterday, as I was thinking about our wedding anniversary. Maybe because I have recently been musing over how our relationship started the same time that Landings did, at a time when I didn’t know anything about inactive Catholics… when God sent me a real live one in you. You, my own St. Augustine, who was as lapsed as lapsed can be. Not inactive, nor returning, but truly lapsed. See how God works.

There are a few things I like to remember on our anniversary:
1) The second month after we had gotten together, I had told Lea, “I don’t know why, but I want to ask him to marry me!” This happened at a time when I didn’t think highly about marriage for probably the same reasons many people don’t these days – How does one know if this will last? What if things change? But that was how much you got me.

2) I never got a wedding proposal. Over the years, I do feel a lot of envy for the beautiful proposal stories I’ve heard. All I got was a confession, “I don’t know about marriage. All I know is I want to spend the rest of my life with you. And if that means getting married, then we should get married.” You spoke exactly how I felt. And that was enough.

3) You said to me once when we were fighting, “You know I try to give you everything you want, right?” Up till then, it hadn’t occurred to me actually. How blind I am not to see love for what it is. When you said that, it became so clear. Why hadn’t I seen it before? Because it isn’t as if you give in to me on my every whim and fancy. You stand your ground, and definitely force me to relook different perspectives. But on the things that matter so much more to me, you do just gallantly and quietly step aside. And I have failed to see many of those instances. (Including how you let me have Maya and Inca though you definitely would love for me to give them away!)

So when I thought about all the could-have-beens, it became so clear that none of those other men would ever have been the blessing I have in you.

Yes, you’ve only bought me flowers just that one Valentine’s (and I was so embarrassed I hid it in a plastic bag!). You don’t massage me like you were so eager to before we were married. 🙂 You’re not Mr Romantic who melts my heart every other week. Neither do you instantly jump to see my point where we differ in opinions, reflections, thoughts and feelings. You don’t discuss movies with me after we watch them. And we can be a lot more affectionate with each other.

But you still laugh with me. And you still challenge me. You cook damn well but can still muster very sincere appreciation of the stuff I cook! Like, really, how do you do that? You take care of Matthew and I the best way you know how, and it’s pretty darn well for someone who wanted neither a wife nor child. We still discuss theology and high ideals and moral values and sci-fi scenarios. You still care enough to be tender with me. We still cry together, or at least, tear up together when we reminisce. You still remember how we fell in love, and why we love each other. And you still want to have my by your side.

Our lives have become so different from what it used to be – travelling without a care, spending money like water, getting sloshed and being happy-high. Gone are the days where we pamper each other with expensive gifts on special occasions.

Like right now, we’re not out enjoying fine dining and good wine. We had a home-cooked meal (not even cooked by me!), put Matthew to sleep, and I’m blogging (Neil Gaiman says I must write everyday… but we shall see how long I keep this up haha) while you’re chilling with games on our couch before you do yet more work.

But if you turn to look at me now, you’ll know I’m sending you all my love. You knew me at a time when life was extremely turbulent for me and you weathered through all that with me. It is only recently that I feel like I’m nearing the end of a very long and vicious angry phase (one that I didn’t even know I was in), and now I see just how patient and kind you have been with me.

For all of how broken I was, or am, and how I am learning and relearning everyday to love courageously again, I continue to ask God for guidance, and you for your enduring faith in me.

I love you, babe.