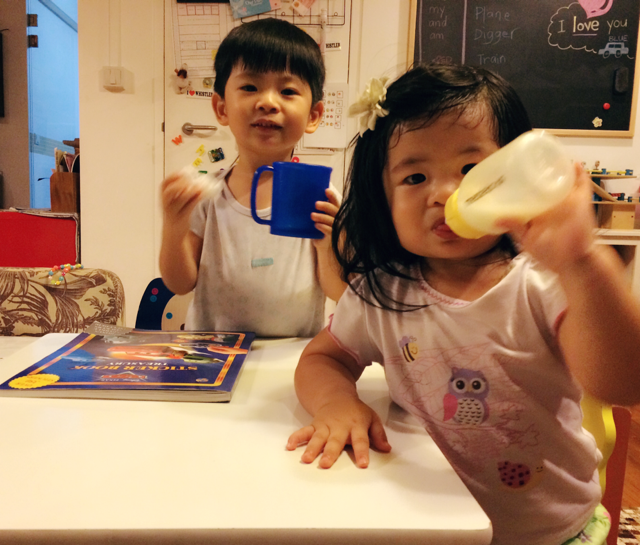 “Screw independence!”, I thought to myself again, not for the first time since I became a mother. That’s not the first and foremost quality I absolutely need to instil in my kids. The one I’m after is, in my opinion, a lot simpler. I need them to feel secure.

I suppose all mothers mother differently, even if two of them are reading the same “How to Mother” book… and even if the only difference lies in just one conscious decision and act of love that varies in degrees, depth or expression.

It seems obvious to me that the only reason I crave for my children to have that assurance of my love, is simply because, I lack that same security. My mum has always said that I’m independent and don’t need her, but I wonder which came first – my independence or the situations that require me to be so.

For sure, I don’t know how I rank on the “independence” scale among my peers and the whole world out there, but it’s never been something that has even crossed my mind until my firstborn came along. Suddenly, then, concepts and raw ideas became concretised inwardly, and personal strengths, weaknesses, vulnerabilities, fears and hopes all became more apparent.

For me at least, I started to remember this label of “independence” and thought how uselessly it has served me – or I have not been grateful enough for it, maybe? I also started to remember with startling clarity how insecure I had been, and how incomplete I still am sometimes. And again, it seems obvious to me that it’s simply because I have never been assured of a mother’s love.

Mother-issues aside, my mission became so clear. I could have my kids learn independence later. Or at least, that’s the hope. Plus the hope that I haven’t screwed them up for life already. For now at least, while they are entirely dependent on me, I so wish to be the one smothering them with inexhaustible amounts of love and affection, just so there is a small chance that they may grow up being ever assured of this mother’s love. (Of course, “inexhaustible” doesn’t cut it, and when that too quickly dissipates, all I’m left with is the struggle to balance between feeling remorse and guilt or sucking it in and soldiering on with hope.)

So tonight, as with almost all other nights, I spend the first half of the bedtime ritual with the same routine of tucking them in, reading a bedtime story, praying together, blessing them and saying goodnight with lots of hugs and kisses… before I proceed to stand midway between my son and daughter (just to be fair), and wait for them to fall asleep. At the back of my mind is always the wistful longing for the day this ritual can end with them falling asleep on their own while I creep out to enjoy an extra hour of my life.

But the second half of the bedtime ritual seeps in as it always does. I look at my half-asleep children and wonder: How is it I miss them so much even when I’m right there with them? I place small, gentle kisses on the almost-two-year-old Emma (because really, I don’t want to wake her) and then I lie down next to my almost-four-year-old Matthew, cuddle him and kiss him and fight the urge to cart him (and then his sister) to my bed. Matthew opens his arms wide and cuddles me back. He kisses me almost as if he is reassuring me of his love even as he drifts off to sleep. And even in that state, his one free hand (the other is scratching his beloved toy cow) to pat me.

It is true that at this stage in their lives, they need me more than anybody or anything else in the whole world.

The greater truth though, is that from the moment they were born, I have needed them far more than their need of me.

Screw independence, I think to myself. I don’t care if I’ll have to be stuck in their bedroom for another year. I want to baby them for as long as they allow me to. For now, they’re going to be getting the same old thing they have gotten from me – my smothering presence.

I need them just as much as they need me, if not more. Guess I’m not that independent after all. That, I’m grateful for. Because we can all grow up tomorrow. Or someday. Just not today.