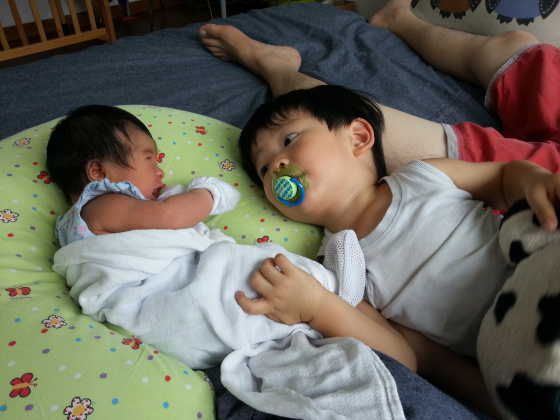 A month later, and it seems as if we have all settled down into a new routine with the addition of Emma in the family. More or less, anyway.

My concerns about Matthew feeling excluded, replaced, or not being able to understand how and why he’s no longer the sole apple of our eyes, seem to be unnecessary worries – thank God.

To allay those worries, we had bought some toys and books that we gave Matthew when I came home from the hospital, thinking that he wouldn’t understand why the new baby was getting all kinds of presents and he wasn’t.

To our surprise and delight, a lot of our friends actually prepared gifts for him! That was incredibly thoughtful of them, and so it seemed, that our little prince didn’t feel left out at all. If anything, he probably thought it was a grand gift-giving occasion when a new baby makes her appearance.

Matthew has made welcoming Emma into the family so much easier than I had thought. Initially, he just quietly observed, and did as he was told – to give her a “big hug” and to “kiss” her. But he’s been taught to do these things from a very young age, so hugging and kissing her wouldn’t be a big deal to him. After all, he gives his toys and any random object a hug and kiss too!

But it brings tremendous joy when I see the two of them interacting. Or how Matthew tries to “be” in the same world as Emma, though he struggles with that, cos he doesn’t quite get why she’s present and not really there (yet).

For example, being so used to everyone responding to him almost instantly when he talks to them, he doesn’t understand why Emma doesn’t respond. So what does he do? He shouts, “EMMA! EMMA!”, sometimes, to her face. I think he thinks that she can’t hear him, and so he yells at her. Still, not much of a response from her.

From me though, plenty of delighted laughs.

It was a real struggle initially to have both Emma and Matt in the same room as we wind down at the end of the day. I couldn’t give Matthew full attention anymore, as I was either breastfeeding or having to tend to Emma when she fusses.

We do get to enjoy some family time together when Augz is home early, and I love nights like these, when the four of us are able to be on the same bed, with cuddles all round. Praying together is something we get to do together then, and Matthew is starting to “teach” his sister how to make the sign of the cross. (With me watching like a hawk for fear that he would be too rough and dislocate her shoulder or something, as he pulls her arms to her head and shoulders!)

To this day, I don’t think Matthew has a firm grasp of exactly where Emma sprung from. When he looks at this pic below (that’s the wallpaper on my phone), he always recites, “Mummy! Matthew! Daddy!” as he points to each of us.

I then ask, “Where did Emma go?”, to which he will search the photo, eyes darting left and right, and then he turns to me and says, “No more!”

So no, I don’t think he gets it that Emma was the babe in Mummy just a while ago.

Nor does he understand the concept of “sister”. But he definitely understands that she’s a part of the family now.

As a nightly routine, after the prayers and bedtime stories and just before he prepares to sleep, we say a round of “Goodnights” – to Jesus, Maya and Inca, Auntie Lavit (our helper), etc. He’s included Emma in the list.

After the goodnight, Matthew says “Love ___” and his initial list went like this: “Love Mummy! Love Daddy! Love auntie!” Since Emma, I asked, “Who else?” and he goes “Love Emma!” What this shows, is that he does understand the concept of family, or at least, who is in his immediate family.

It continues to amaze me how little ones learn so much in such a short time.

There are, of course, times when Matthew gets upset with her. Especially at playtime (which is almost all through the day) but I’m there with Emma in my arms, or breastfeeding her, which means I cannot be as mobile with him.

Then, he would run to where her day crib is, and pointing to it, say, “Put down.”

All in all though, he’s just been a superb little big brother, my little big hero whom I continue to be so damn proud of, the one who’s made it so easy for us to introduce Emma to the family.

I’ve always liked to think that Matthew’s a loving boy who’s generous with his smiles, affection and love. It’s something I thank God for and in this early experience with Emma, he’s continued to prove me right.