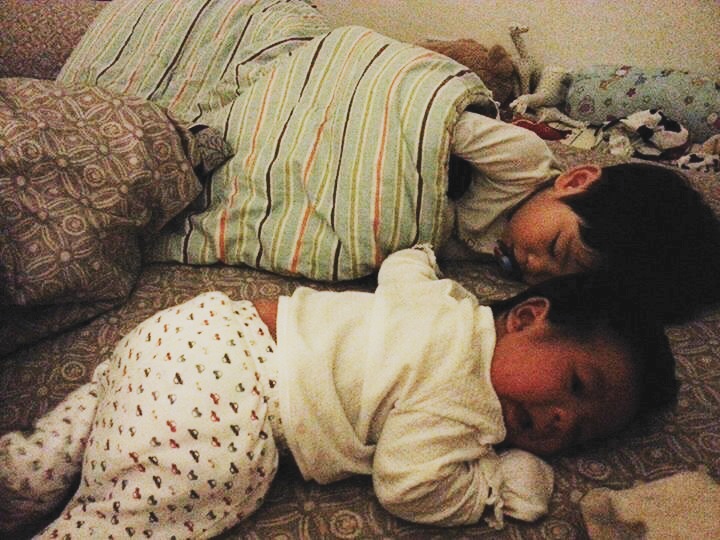 The regrets that are too few to mention

On this night, one line from Frank Sinatra’s “My Way” repeats itself in my head: “Regrets, I’ve had a few, but then again, too few to mention…” as I tuck my babies to sleep.

Truthfully, there is nothing to regret, but ruefully, maybe just one or two. No cause to be upset about as these episodes might be better called nostalgic affection for a time that passed too quickly.

This evening, as I lay my 15-month-old Emma to sleep, I wonder how it is that she’s grown so big. She is all 11.5kg baby, toddling around (she can walk?!), quick to throw a tantrum (by easing herself slowly onto the ground and then gently putting her head on the floor before she begins crying), and ably fast to defend herself against her brother (even yet swifter to deal an offensive blow to same brother).

But how is it she has grown so?

I looked at her, bent down to place a kiss on her, and think once again, how I have so few memories of her through the first year of her life, compared to all the memories of Matthew that have seared themselves into my brain.

Will I regret not paying more attention to her all through the last year? It is after all, a time I cannot return to.

An hour later, still with Frank Sinatra for accompaniment in my head, I sat down beside my three-year-old Matthew as I prayed over him and kissed him goodnight.

He asked, “Mummy, do you want to lie down here?” as he patted a spot next to him.

“Would you like me to?” was my response. His question surprised me because most times now, he would complain that it is too squeezy when we try to lie down beside him, which is something we don’t do often anyway since weaning him from our bed, because it simply makes no sense to get him accustomed to being away from our bed only for him to get used to having us in his.

But tonight, he invited me to lie down with him, versus his usual question of why we have to go to our own bedroom after he sleeps.

So I did what I still crave for: I lay down next to my son, who has slept with me for some two-and-a-half years.

And once again, I ponder the time that’s passed.

Oh, I know, it’s not like we will never share a bed again. We did, in fact, all four of us, shared one huge bed on our recent vacation to Whistler. One night, after Emma was sound asleep, Augz, myself and Matthew lay quietly in bed as Augz and I hoped for Matt to fall asleep so we could start the night time revelry. Suddenly, there were echoes of little explosions going off not too far away.

The window in our bedroom lit up. A second ago, we could only see moonlight and the silhouette of Whistler Mountain from where we were lying down (though the view was a lot less romantic and a lot busier – of Whistler Village, if we were to sit up in bed).

But as the explosions began, the night sky lit up with amazing fireworks. I have never seen fireworks so close in my life, though they definitely aren’t a rare sight living in Singapore where fireworks happen every Chinese New Year and National Day at the very least.

That night though, three of us lay beside sleeping Emma and watched the radiant showers exploding themselves into splendour. Matthew was in wonder, as we explained fireworks to him.

So yes, we will share a bed again, and most likely it will be even more uncomfortable than it was before.

But never again will we return to that age when he was a mere babe, usurping all the space in our queen-sized bed. It will never be the same as it once was.

I wouldn’t have it any other way, as I continue to pray that my children grow up strong and healthy, to become beautiful, loving, kind and happy people. I would never wish for them to remain a certain age, for that just really means terrible fates that I can’t even write about.

But every now and then, I still have that silent desire for the days gone by, as I miss the simplest and most basic pleasures that will never return.

Again, it is rightfully so. For we should keep looking forward to what’s coming and not what’s gone. Still, for tonight, I indulge my wistfulness, my penchant for what’s past, my regrets of time’s hastiness to rush by, and the living words of a very dead Sinatra.