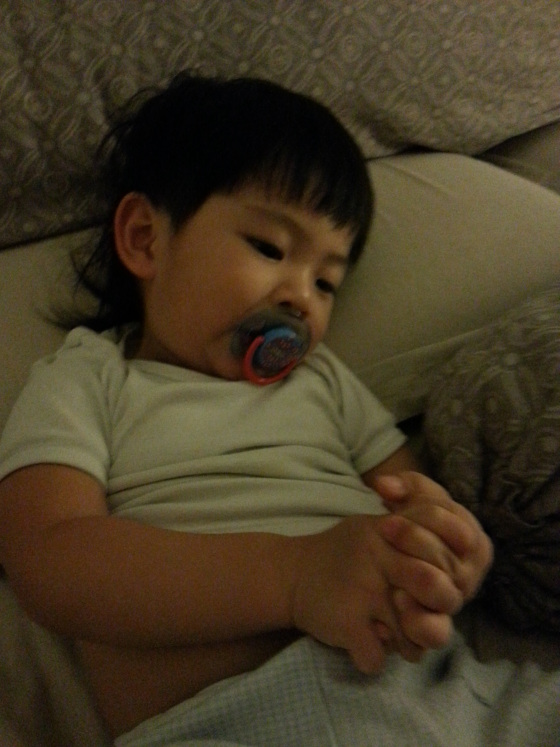 Last night would officially be the night when Matthew finally clasped his hands properly for a decent “Amen!” It’s one of those small accomplishments that are just so cute to celebrate, especially when he seems so proud of it.

Thanks to Karen who has always shared how she had prayed with Timothy (her son, my godson) from young, and how little Tim used to poke himself in his attempt to make the sign of a cross, we too, had adopted her way of praying, with Matthew since his baby days.

This is another one of those blessings in life we didn’t count on, or even thought of. If she hadn’t shared her experience, we might not have known to pray with our son in this manner. We’re so glad she did!

Well, I don’t know if we actually did that from when he was born. We prayed over him, for sure, but maybe without him making the sign of the cross, since he would have been sort of fragile as a newborn. But I know it’s been a nightly ritual for as long as I can remember.

The ritual is quite simple actually.

For me, it’s a reminder of who the family consists of – the cats, us, and of course, Jesus. None of whom should be left out.

When we stayed at my inlaws’, Matt’s crib faced our altar. Recently, we had to move the statue to Augz’ workstation (see Jesus on left) so He’s technically not on the altar anymore cos Matthew was peering upward at the altar but not seeing Jesus from where he now sleeps.

As for the content of our prayer, we usually just give thanks. Or affirm Matt for who he is.

Recently, I tried to make it more relevant by running through the day’s events with him – “Did you enjoy your time at the sandpit? Did you like playing with the other children?” to which Matthew will nod, and then I’ll make that a part of the prayer – “Thank you, Jesus, for the time we had at the sandpit, and for all the children that Matthew got to play with.”

Or “Thank you Jesus for all the people who love Matthew, because he is such a loving boy!”

I don’t know how much of these prayers he understands – probably none at all – but it’s been a reminder for ourselves to be grateful for the little episodes to be thankful for, as they unfold each day.

At one point, Matthew refused to say “Amen” but would break out into “Aberkadoo!” or some similar gibberish, and get quite proud of himself. But we persisted.

So now, he’s back to saying his proper “Amen!” and finally manage a proper prayer clasp. I dramatically cheered him on when he first did it last night.

And as a result of that encouragement, he’s gotten quite pleased with himself.

Today, as we said grace and he finished it with his hand clasped, he proudly called out, “Mum-mae! Auntiez (our helper), Ah-ma (my mum came to visit)” just to show off what he could do.

Tonight, he did the same, proudly displaying his clasped hands to all the stuffed friends around his bed.