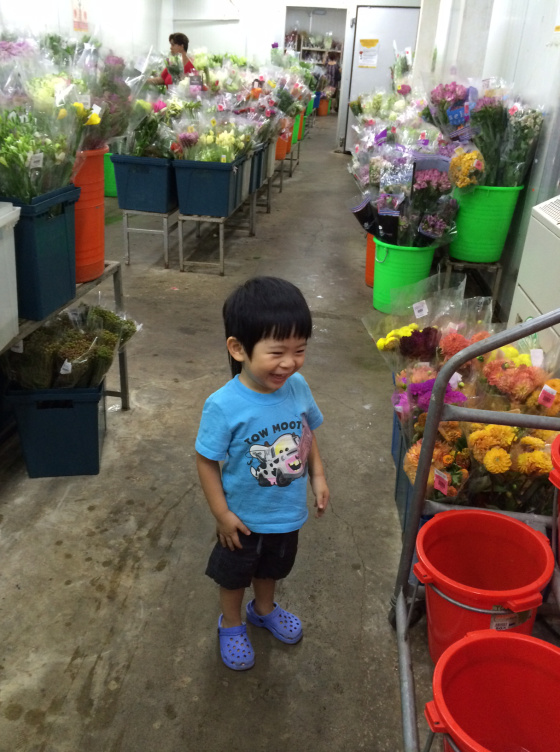 KPIs vs “Stop & Smell the Roses”

Not too long ago, the issue of KPIs for the kids was raised to me, to which I felt puzzled by, only to realise later why it was that I felt that way – I have no KPIs for the kids. Not yet anyway, since they are really just… babies.

Hopes? I have plenty, and I feel quite positively about having these.

Expectations? I have some, to which I don’t feel quite as good about, having still not decided if it’s a good thing to have expectations.

I was in no hurry for Matt to start walking, talking, learning. If anything, I wanted him to be a baby as long as possible. At every point in his life, he has been the one reaching each milestone before this dense mother is awakened to the idea that it’s time to move on to the next step.

We took walks every evening, because I felt it was good for him to get out. I pointed things out to him, the lamppost, the “tree in the sky”, the kitty-cats, and the many uncles and aunties, cheh-chehs and kor-kors whom we will say “hello!” and “bye!” to.

I walked and hopped with him at home to the song “Walking with Jesus” because he started trying to walk first.

There was no planned swimming weekends, runs in the park, sand play (till we moved to our new home), or lessons to be learnt. We read every night but it was always the intonations he was attracted to, not the words. He enjoyed music and movement from young, which is so wonderful then, that his school curriculum includes a “Music and Movement” class.

This piece of “Matt’s Schedule” has been pasted on our door since shortly after we moved here last June. Why it got up there, was because I started to notice that Matthew has formal knowledge of what we have only covered conversationally – he knew his colours, shapes and could identify items. But I had never sat down to study these things with him…

And so I started this list of things I should teach him – only to never get round to doing it.

On the other hand, I had plenty of KPIs for myself. Boundaries that I placed on myself to curb my otherwise previously unbridled impulses. One for example was, to be at home every other night besides Mondays and Fridays. Why? Because Mondays were, and now are again, reserved for Landings, and Fridays reserved for date nights with the hubz. All other nights then, had to be reserved for putting Matthew to sleep, especially since I used to work very late hours.

I didn’t remember this till very recently, when I was wondering why I had to be the one to put him to sleep all the time. I couldn’t delegate because there was a very practical reason not to, back then. It is good to remember this now, because the KPIs are about to set in (evil laugh).

Another KPI I had for myself was, to make sure he got plenty of play time. In between his naps, he doesn’t get a lot of playtime so I find myself persuading him to hurry up and play instead of indulging his post-nap tantrums.

And then, the bookclub I was participating in with some friends had us reading this book “Having a Mary Heart in a Martha World”. I found myself reading it like a guide to motherhood, drawing references to how I am to be as a mother.

“Stop and smell the roses”, it encouraged. Okay, so I tried that. Instead of hurrying him to get dressed and have breakfast before leaving for school, I lay around with him in bed for a while, breathing in-and-out, in-and-out while he dawdled and took his own sweet time to resist brushing his teeth and getting ready… stop and smell the roses, right?

Not really, cos we end up getting later and later for school… even as I find myself waking up earlier and earlier to get things done before waking him up.

Still, it’s a really much-needed reminder. So I let his tantrums run its course when he’s clearly just tired and not being a brat. On good days, I sit with him and cuddle him while he works through his tantrums. On bad days, I just don’t chastise him but choose to sit quietly beside him and work on getting my own temper in control.

The conclusion to KPIs and smelling the roses: Make the roses-smelling bit the KPI. It’s a helluva lot of work to do that. Way easier to just barge through the rose garden – might not get as pissed off by the accidental thorn pricks along the way.

Still, what’s a mother to do right? Especially a mother who thinks the roses are coming and going by way too fast.

Having said all these, the boy’s turning three in three months’ time. It is time to set the KPIs in place for him, and to reduce the silly KPIs for myself. Fingers crossed on both fronts, even as I really look forward to the next lap of this journey with him. The only thing I need to keep remembering even as the KPIs begin – to stop and smell those damn roses.