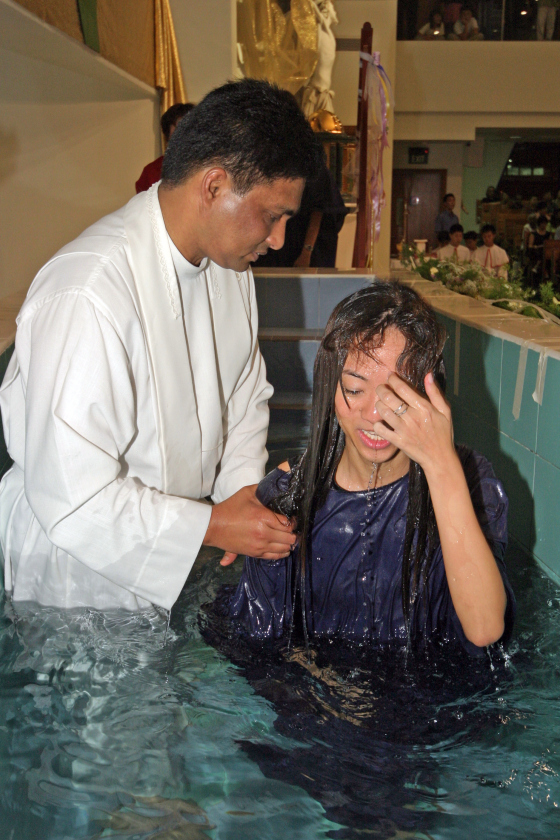 My vocation away from church

I found the very thing I never even knew was missing from my life, is how I describe my Catholic identity. This photo here, captures that very moment when I was baptised (10 April 2004) and the subsequent years after was when my faith was nurtured, tested, solidified and constantly renewed, with every bump on life’s journey – both good and bad ones.

This boy who handed me the lily nine years ago, is today, my godson! 🙂

Since the night I was baptised, I’ve been in active Church service, specifically through RCIA, CatholicNews and Landings. And when I say “active”, I meant that I have given my all, specifically what I used to say – my sweat, tears and blood.

Even in the worst of times – and there were some truly rough ones – I have never thought I could have a calling elsewhere.

Marriage was not on my mind (the convent actually was, for a brief time, until I had to be honest with myself and accept that I can’t give up my smokes and drinks). Children definitely did not even cross my mind at all.

Meeting an inactive Catholic husband was like God’s affirmation when I started a new chapter with Landings after RCIA. Having him return to Church on his own (it all unfolded in God’s time, not mine!) and serving together with me in ministry remains one of the greatest blessings I have found.

Nine years after my baptism, and with one Matthew in tow, I realise for the second time in my life, I’ve found something I didn’t even know I wanted – to be a mother. It wasn’t something I chose, or accepted, but to my surprise – and to the surprise of those who know me well – it was something I found myself embracing unconditionally once I became one.

But soon enough, I found myself struggling to maintain a balance between service and family.

I really did try to fulfil my role both as mother and in service through Landings. Until we became helper-less. Even so, I tried to lug Matthew to church with me on Monday nights when we meet but it became so apparent – to me at least! – that it’s not realistic. I can break the routine that I maintain strictly for Matthew just to make it to Landings with him… but I can’t have a shower and head to church if Augz doesn’t make it home on time.

Ah! To be thwarted by a simple logistical issue!

One that’s so real, nonetheless.

In any case, after a long deliberation, I’m taking “leave of absence” from Landings. Not from Church, but from ministry. It’s something I have to do right now, at least until we have a helper again. I know it’s the right decision, but I still miss being there toiling with the community.

And then last Sunday at Mass, “Summons” was sung:

“Will you come and follow me, if I but call your name?”

And as usual, He leads me on to discover that His plans are far better than I imagine, and on to ever greater treasures. A timely reminder, and the affirmation I need.

Gratefully, I remain Your daughter,