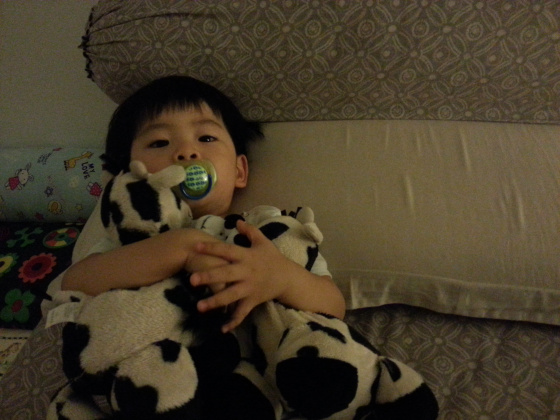 The Boy Who Made His Parents Weep

The other night, Matthew had both Augz and I weeping as we were putting him to sleep. We were, in fact, spontaneously moved to tears by his innocent act of surrender of his favourite cows.

You see, Mr Cow* (the leftmost one) is his favourite toy. It was given by Miko and has accompanied him since we were still at Mount Alvernia. According to “What To Expect”, newborns see only blacks and whites, which possibly explains why he was so drawn to Mr Cow right from the start.

[* Mr Cow is actually a misnomer, as Augz correctly points out – cows are females so there can never be a Mr Cow. How many of you figured this out as you read this post so far? Well, it didn’t even occur to me till he said it!]

Anyway, knowing how attached he is to Mr Cow, we decided to buy a duplicate (the one on the right of the picture) sometime last year. Just in case the original gets lost or is in the wash, or when it eventually wears and tears. For a while, Matthew didn’t know the difference, or even realised there were two. I used to place one in his crib for nighttimes, and the other where his toys were in the daytime.

But he has this habit of rubbing their tails and the accompanying tag right by their tails (like how Linus in the Peanuts comic strips always carries his security blankie around, or how some kids have to feel their favourite corner of the pillow to sleep…), so what this means today is that the original Mr Cow has a tag that’s almost completely worn out, while the duplicate Mr Cow’s tag is still, very much intact.

Based on this small difference, and the feel of their fur (one is obviously more worn out, having endured more washes), Matthew actually knows the difference between the two, and prefers the original one.

And no way will he part from them. On good days, he can tolerate it when we take No. 2. But most nights, he must have both cows.

So the other night, we decided to tease him… all this in line with teaching him to share his toys, something he’s learning everyday at the sandpit where he gets to exchange play things with the other children who are there.

There we were in bed, all three of us, and I took one Mr Cow and said, “This is Daddy’s Cow!” before passing it to Augz to hug. Did the same with “Mummy’s Cow!” and claimed it for myself – all this time, Matthew was protesting babyishly – and then I took a small little cow that I had bought for him when we were shopping for Augz’ birthday present; I passed that one to Matthew and said, “This is Matthew’s cow, it’s a Baby Cow!” He accepted it, quite uncertainly.

I reinforced the message: “See, Daddy has Daddy’s Cow, Mummy has Mummy’s Cow, and Matthew has Baby Cow!”

He looked at us, and at the two Mr Cows we were holding and hugging tightly – he looked longingly at his two favourite cows in the whole world – and then he looked down at his small little Baby Cow which is quite impossible to hug at all, and then he laid back on the pillow and resigned himself to patting and “big-hugging” (by placing it under his armpit) Baby Cow.

Reunited with Big Hugs all round!

Yes, he resigned himself to it. He wanted his two favourite cows – his prized possessions – but he accepted that we were taking them, and just quietly went about hugging his small little Baby Cow.

I swear, my heart just cracked. And so did Augz’. He teared first.

I quickly gave our cows to Matt, and said, “No, you can have your cows!”

And guess what he did? He passed one back to Augz, the other back to me, lay down again and patted his Baby Cow quietly.

Gosh. So there we were, two proud parents wiping our tears away. We couldn’t stop hugging him and kissing our dear sweet little boy.

Often, I think I can’t love him anymore than I do… and then he goes right ahead and proves me wrong. Just like that. So easily.