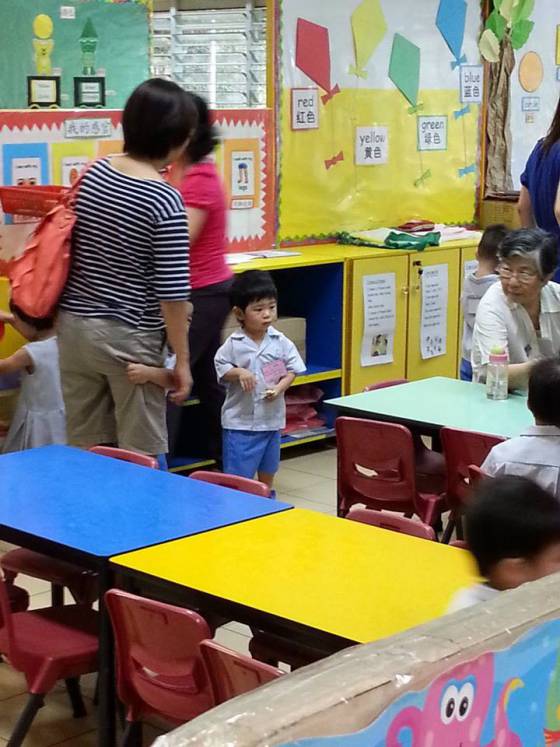 We Will Never Let You Go

It is this look on Matthew’s face that chokes me up. He got distracted by the teachers, and then realised he’s lost us. Although I make it a point not to just disappear but always tell him when I’m leaving, I doubt I made myself clear because any clearer would mean too much alert to my going away.

I see this look and wonder what he’s thinking: Is he frightened? Does he feel abandoned? Betrayed?

It isn’t easy not to run to your child when he’s crying for you, or to retreat when he’s got his arms raised to you, screaming, “Mummy! Mummy!” as a teacher takes him away from you.

But I, like all the other mothers, have survived that!

I was very apprehensive (though also very excited) whenever I thought about Matthew starting pre-nursery and the first three days at Marymount Kindergarten did go by relatively well.

Those three days were what I would call, “simulation sessions”, when parents were allowed to be with their kids and each day lasted only one-and-a-half hours (actual school sessions last for three hours). We got sneak-and-speed previews of what school would be like, with very quick play times, sing-and-dance sessions, etc.

It was a lot of fun for Augz and I to watch actually. And at the end of each day, we happily took our little boy out for some fun before heading home for lunch.

But then the fourth day came. And it was time to let him go on his own.

He cried of course, when we had to leave him at the classroom. I held up pretty well. The tears came naturally but I didn’t let them fall. It was just sentimentality, I told myself.

Then I got into the car to drive Augz to work. And then I broke down. It wasn’t sentimentality.

There was an absence in the car. There was no baby in the car with me. I realised then, that I haven’t been separated from Matthew since I stopped work. Sure, we have been away from each other every now and then – like when he goes to his grandparents’, or when I go for Landings. Other than these appointments, he and I have been together practically every moment of every day.

And for the first time in maybe a year, my baby was away from me. For real. Not just sleeping at home, or with grandparents. He was on his own in school. He wasn’t in the car.

That absence was stark and extremely difficult to bear. My chest literally ached and I cried like I haven’t cried for a while.

But in view of the new year and how I had resolved to be more positive, I looked at this objectively and know, “This is good.” He is growing up – more quickly than I would have liked. The speed at which they move through the baby phase is like a slap in the face, actually… but it is well and good.

So I decided: Let the tears fall. Laugh and cry at the same time. And then, move on, as all mothers do. This is but the first of the many bittersweet heartaches mothers often talk about, I now realise.

Now, what isn’t so good, is that for the first time also, I have no idea what Matthew is doing. When I ask him about school, he tells me they did “dancing”, “sing songs”, “wash hands”, “playground”, etc. but I have no way of verifying if what he says is true. It’s frustrating! I wish I knew if his memory is accurate… or maybe I just want to know everything about his life. Controlling mother, I am.

Last observation and best reminder learnt from this period happened on that fourth day of school which was also the first day of school proper. As we walked Matt to class, we passed by a parent. A grown man, well-dressed like he was some business person, was crouching behind a row of cabinets. There he was, looking smart in his shirt and pants, and spying on his little one.

Guess we are really all the same when it comes to what matters. Whatever role we play in the world out there, whatever corporate ladders we are trying to climb to where the Olympian Gods of our company reside, at the heart of it all, we are still parents to our children – the only small people who keep us so vulnerable we need to hide from them so as to avoid making it worse for them to separate from  us… which will in turn make it so much harder for us to walk away from them, especially when all we want to do is to run to them and snatch them away from the teachers and have them back in our arms, all the while cuddling them and saying, “We will never let you go.”