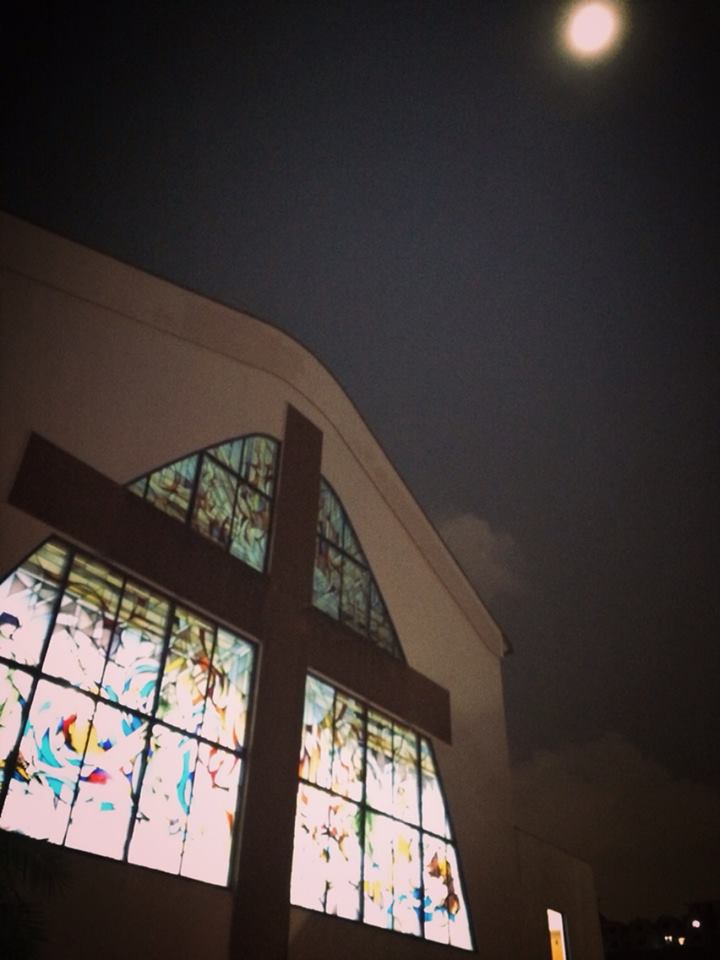 11 years ago today, I was fasting at this time, hungry but excited, exhausted but thrilled. Why the range of emotions? Because in half a day’s time, I would step into a baptismal font for the happiest experience of my life.

Today is my 11th birthday as a Catholic, and it has been an amazing decade being one. I like to always say that I’ve witnessed magic and miracles because that’s the truth. As someone who believes in the wonders of the world, these don’t surprise me much but every time something wondrous happens, my soul is replenished to be aware of God’s presence ever more keenly.

It hasn’t always been a breeze, of course. The last decade was filled with an equal share of celebrations and heartbreak, victories and loss. I’ve been equally shepherded and abandoned, supported and discarded.

And I feel I need to add, that I too, have let others down and hurt them too.

This year as Holy Week drew near (last week), I remembered how I had closely followed every single Mass and service right up till Easter Sunday. At least, I did until the kids came along.

The first year, the husband and I bravely brought four-month-old Matthew along, and of course it turned out to be a whole lot of inconvenience and difficulty for us new parents.

The second year, we persisted and the experience went quite beautifully, especially since 16-month-old Matt had seemed quite enthralled by the baptisms.

The third year (last year), we threw in the towel mostly because neither of us believed we could survive the Easter Vigil with a two-and-a-half-year-old Matt and his six-month-old sister in tow.

This year, I decided to try to put them to sleep earlier so Augz and I could attend the Easter Vigil on our own, especially since we had already miss Maundy Thursday at church.

My world came crashing down. Instantly, all the desire I had to turn up for the Easter Vigil, vanished.

But the man had spoken and he had made his request. This man, who once had to be persuaded to sit through the long vigil, and who once did not take well to having kids, and who once never wanted to bring them to church.

How could I say no?

So we brought the little ones. Dressed them up nicely so as to be fitting for the celebration. And this was after a morning spent cycling at the park, an afternoon at swimming lessons, attending our Malay neighbour’s wedding downstairs and not napping adequately.

Once again, “The will of God does not take us where the grace of God will not follow.”

The night was exhausting, but it didn’t turn out badly at all.

Augz was great with Emma who was cranky and fussing because it was way past her bedtime and she couldn’t sleep because of all the applause when the baptisms started, the celebratory hymns, and all other activity.

Matt took a nap at the pews and still got to see the baptisms. I hope to remember the moment earlier that evening when the Paschal candle was lit and how he had looked on excitedly, while trying to blow the flame out with his “Pfft! Pfft!” from metres away. I laughed, but thought how horrifying it would be if he had actually succeeded!

We saw the RCIA team work hard as usual, and I missed every bit of that action.

We saw young and old men and women enter the baptismal font with anticipation and emerging with victorious and gratified smiles, and I missed every bit of being up close and personal with them.

Once, I served in the RCIA and loved every moment of that. I loved trying my best to convince those who were seeking God that they should follow Him – only to fail… and then have their doubts erased and their convictions cemented by no effort of mine but that of the Holy Spirit at work. It was always a humbling and heartfelt experience.

I loved knowing the people who went through the baptisms because being aware of their stories and situations in life makes me appreciate all their trials and tribulations more, and makes me proud to acknowledge their courage and persistence in seeing the journey right to the end.

I had served in the RCIA because I was birthed through it and that was the only way I knew to express my gratitude and to pay the blessings forward.

But I was the recipient of blessings anyway because those were glorious years when I experienced God at every turn of the day.

11 years later and my journey’s quite different today. Still, I have no regrets and I continue to love every single bit  about being Catholic – struggles, failures, trials, victories, choices, community, faith, convictions, perspectives.

11 years ago, I was gifted with a lily by my godson, who was a little boy and did not want to let go of the flower. He wasn’t my godson then, but how would I have known he would be today?

In the years that followed, I searched out little children at the Easter Vigil to continue this beautiful tradition – a gesture so simple but one that would go straight to the heart.

11 years later, my son was one of those who held flowers in his hands to gift to the newly baptised (“They look like the veggies we have at home!” he said).

Life changes and the beauty of the adventures only gets more resplendent. It has been that way for me since 11 years ago.

Most definitely, I don’t succeed everyday, or even at all in some cases.

But I have been blessed to be able to keep trying, and I thank God for all of it.

Happy Birthday to me,