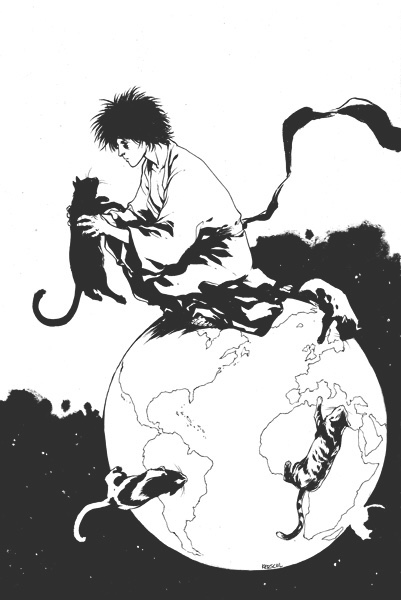 “So what now?” was the question my father sheepishly asked Jesus as they walked along side by side.

Jesus smiled at him – of course – and they walked along, together, forever, into the unending Road to Emmaus.

I saw that and had no other choice but to say goodbye – logically in my head, I knew that was the only way it ought to be, and painfully, much too painfully, in my heart, was where I felt deeply the keen conviction that it was right.

This happened at the end of the first retreat I had attended after Dad’s passing. I went in obedience as I was supposed to show up; what was unforeseen was the rage I felt when face to face in the quiet of God’s presence. I was angry. That evening at prayer, I had bitterly spat out “YOU took him away, YOU better take care of him now.”

What is there to say when we lose someone? People live, and people die. No one’s going to live forever. We all know that. But when one of our own is dying, there in the heart of our hearts lies the foolish hope that our loved ones can escape this mortal coil. We pray, we entreat, we try to bargain and we thrown tantrums, break down, plead, cannot get up from our knees… and when the inevitable happens (if not now, then later), we feel betrayed, get angry, and hurt so much. Yes, it’s the process of grief and yes, we all know that, except when we are rendered incapable of knowing anything but pain.

I had spent that entire retreat alternating between white hot rage and deep dark despair. I cried big, fat tears and they came fast and furious. Even if I could stop them, they wouldn’t stop flowing. And I wasn’t in the mood to stop anything. I had surrendered to the dark side where there was no coming out of the hole I wanted to stay in.

All I knew was at the end of the retreat, as we were singing the final hymns, and when I was completely broken because I had expected God to heal me but He had left me hanging, there was a slide that came on the powerpoint with lyrics to a hymn I cannot remember but with an image that would forever be seared in my brain.

It was of the two walking with Jesus on the Road to Emmaus.

In that hymn that lasted not more than five minutes and a slide that would be clicked to the next one in not more than 10 seconds, I was invited into that very scene. But I wasn’t one of those men. I was simply a little bit further away watching my father sheepishly acknowledging Jesus and still being unable to find the words to say that he recognises this is God (proud Asian men are like that!) and Jesus smiling at him in a response that said the world: there was no need to utter any admission, because He Knows.

He knew what my father was acknowledging: That He was Christ and while he may not have known that in his short earthly life, my father knew then.

He knew where He was bringing my father: With Him.

He knew what I needed: To see that.

They walked along, together, forever, into the unending Road to Emmaus.

By then, I was inconsolable but I said it, somewhere inside at the heart of my pain, a twist to my first response at that retreat, “YOU took him away. I know You will take care of him.”

On Saturday, our beloved family cat, Kitty (long story short, while Bro and I were deciding on what to name her, Mum did), sweet, beautiful, precious 18-year-old Kitty, died. She whom my dad had been so fond of as if she was a grandchild, left us. I cannot stop thinking that she has finally gone to be with him again.

I know creatures don’t go to Heaven; and I know if someday I’m blessed enough, I will ask God: Really, why not?

In spite of all that, what will remain with me is the two of them, my father and Kitty, walking side by side, on the unending Road to Emmaus, and who knows, maybe God in His mercy, will receive both with wide open arms and engulf them in that embrace that will finally take all pain away.