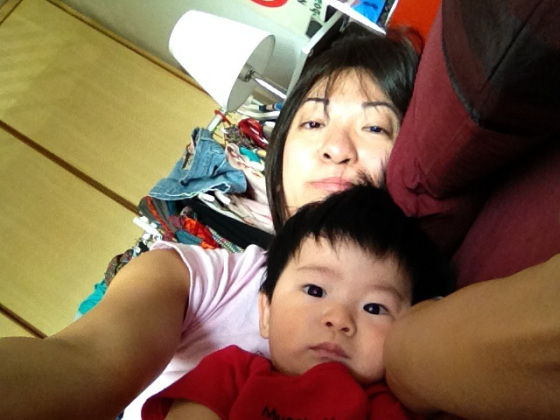 An ordinary Monday afternoon. Mucking around with my son in the living room. He climbs the couch and indicates that he wants to sit on the couch “like a big boy”, as I’ve been teaching him to do.

I take my spot beside him, and in the midst of that, clumsily knock my heel against one table leg, making a loud “THUNK!” The boy got a shock but his face lights up in delight as he sees mummy writhing in pain and going, “oooooowww….. oow. ow. owwwww.”

Clearly, this must be a new game!

But mummy didn’t let up. I continued holding on to my heel, waiting for the pain to subside. Beside me, Matthew sobered up. He got all still, quietly watching me with a very serious expression on his face.

I decided to add some drama to the whole episode and told him pitifully, “Ooouuch. Mummy’s leg is so painful. Owww…”  He watched me dolefully.

Then I went in for the kill.

“Can you give mummy a ‘BIG HUG’?” Immediately, he clambered to his feet and dashed over to me with his short, stubby arms outstretched to engulf me in one of our big hugs.

I decided to push it a little further.

“Can you kiss my foot?” I asked as I continued rubbing it.

Without even thinking twice – and he knows how to shake his head to express when he doesn’t want to do something – he bends down, all pouty-lipped, and kisses my foot.

For a second, I considered holding him back. After all, that foot is not the cleanest, having been walking around all day. But I decided to let him be affectionate anyway.

I held my boy, kissed him dearly, thanked him for making mummy feel better and told him how sweet and loving he is.

Every time he falls, or accidentally hurts himself, he would come running and holding up that painful finger, or wherever it is he’s been hurt, and I would ask, “Oh, what happened?” before kissing the injury away. Yesterday, I was deeply surprised that he actually understood what I had been doing, and wanted to comfort me in the same way when he knew that I was in distress of some sort.

It might be for the first time that I felt this big “WOW” moment of realisation: This is what it feels like to have my love returned by my son! This was his act of love. An actual expression of his love for me. And it felt Real Good.